To reduce cognitive load, and make it easier for developers outside the ArcGIS Hub team, we have introduced a set of Manager Classes. These classes are Entity Specific (e.g. there is a HubProjectManager class), and they encapsulate the standard operations for an Entity - create, update, destroy, fetch etc, as well as entity specific operations.

For most developers, the Manager Classes are the simplest way to work with ArcGIS Hub.

Manager Classes take and return "entities" as simple objects (POJOs), which are not instances of classes.

Once instantiated, you can call the exposed functions without passing in platform or identity information.

All modern web frameworks (React, Angular, Vue, Ember etc) leverage some form of change tracking to determine when to re-render the UI. Typically this is done via object equality (aka ===) or ES6 proxy objects, both of which are very efficient, but add complexity when working with Class instances. To keep things simple for all frameworks, Hub.js has enforced separation between the Manager classes and the entity objects. All Manager functions which apply changes to the backing data store, will return a newobject representing the updated entity.

In the example above, the .update(..) method of the HubProjectManager class instance returns a new IHubProject entity object. This new object should then be assigned into the application's state management system.

Composition via Interfaces and Functions

Manager classes and the entity objects they work with are defined via interface composition.

The Managers all implement the IHubEntityManager interface, which defines the basic CRUD+Search operations.

Additionally, Managers also implement "trait interfaces" (e.g. IWithLayoutManager), which define standardized behaviors. This allows different entity types of compose their behavior and properties based on common patterns, while still enabling per-entity customization where necessary. The actual implementation of the behaviors is typically delegated to a generic function, ensuring all entities implement the same behavior the same way, while still allowing for minor variations.

Similarly, the entity objects will conform to the entity specific interface (e.g. IHubProject) but those interfaces are composed with "trait interfaces" to ensure consistent properties are used across the types. 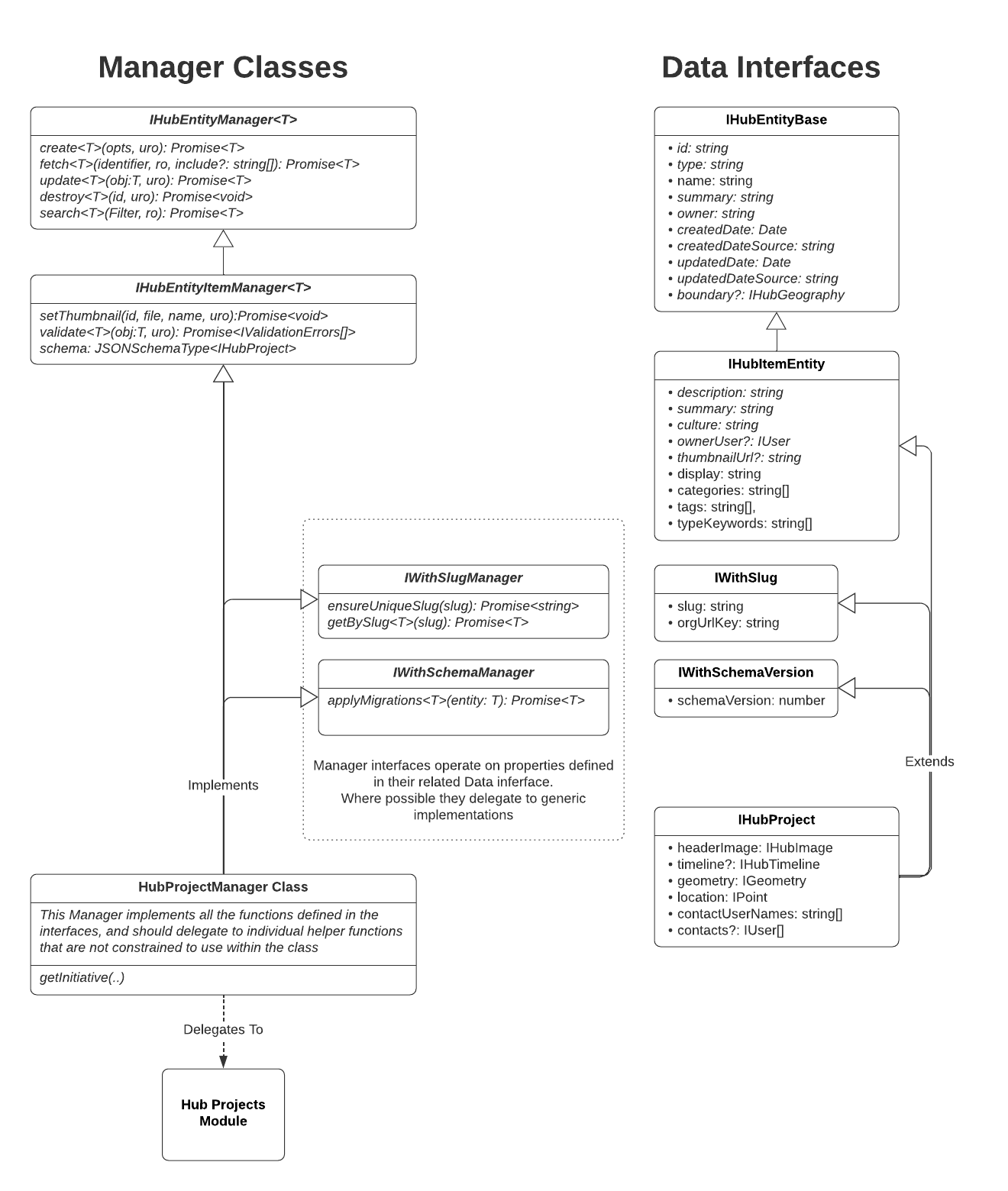 This pattern ensures consistent API's across entities, powered by stand alone functions, composed into the Manager Classes and entity objects.

The final pattern is oriented towards developers looking to automate various Hub activities via scripting. In this pattern, all the Managers are accessible from a central Hub class.

While this api could be used in a web application, the tight coupling between the Hub class and all the Manager classes means that the build output would contain the vast majority of the Hub.js library, despite the application likely requiring a small fraction of that.

Backing the Managers and the Hub Class are a collection of functions that implement all the business logic for working with ArcGIS Hub entities (Sites/Pages/Initiatives/Projects etc). While most developers should look to leverage the Manager Classes or the Hub Class, those who need a more flexible option for composing other workflows can opt into this level.

While this pattern enables the wide reuse, and simple composition, it comes at the cost of increased cognitive load for developers - you need to know what functions to use and what context to use them in. The API Reference contains a full list of all the functions.

Additionally, working with modern build tools, this level of abstraction will result in the smallest built output, as functions are the simplest structures to tree shake during a build (assuming you only import the functions your code needs!).